Phone numbers are available for your business and we can help you get the desired zip code local business phone numbers fast and easy. 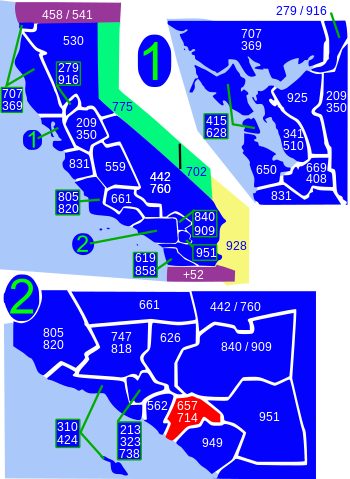 Cities in the 657 and 714 area codes include Tustin, Placentia, Anaheim, Buena Park, Costa Mesa (unique because it is split between the 714/657 and 949 area codes, at Wilson Street and along Newport Boulevard), Cypress, Fountain Valley, Fullerton, Orange, Garden Grove, Santa Ana, Villa Park, Yorba Linda, portions of La Habra, and most of Brea and Huntington Beach.

The original area code, 714, was split from area code 213 as a flash-cut in 1951. Originally, it included most of Southern California, generally south and east of Los Angeles, extending to the Arizona and Nevada state lines to the east, and south as far as the Mexican border (what is now area codes 442/760, 619, 858, 909, and 951). Despite Southern California’s explosive growth in the second half of the 20th century, this configuration remained in place for 31 years.

By 2007, 714 was running out of numbers due to Southern California’s continued growth and the proliferation of cell phones and pagers. As a solution, area code 657was overlaid onto the 714 territory on September 23, 2008.[1]

The two area codes now cover northern and western Orange County (except for portions of La Habra and all of Seal Beach, Los Alamitos, the far northwestern portion of Brea, and the western portions of La Palma, which have always been in the same area code as Long Beach—currently the 562 area code). This is probably because at the time those splits first occurred, while most cities in Southern California were provided primary local telephone service from what was then Pacific Bell (now AT&T), the cities listed above were served by GTE, the primary telephone provider for Long Beach (this territory has since become part of Verizon, and now Frontier).

We use cookies on our website to give you the most relevant experience by remembering your preferences and repeat visits. By clicking “Accept”, you consent to the use of ALL the cookies.
Cookie settingsACCEPT
Manage consent

This website uses cookies to improve your experience while you navigate through the website. Out of these, the cookies that are categorized as necessary are stored on your browser as they are essential for the working of basic functionalities of the website. We also use third-party cookies that help us analyze and understand how you use this website. These cookies will be stored in your browser only with your consent. You also have the option to opt-out of these cookies. But opting out of some of these cookies may affect your browsing experience.
Necessary Always Enabled
Necessary cookies are absolutely essential for the website to function properly. These cookies ensure basic functionalities and security features of the website, anonymously.
Functional
Functional cookies help to perform certain functionalities like sharing the content of the website on social media platforms, collect feedbacks, and other third-party features.
Performance
Performance cookies are used to understand and analyze the key performance indexes of the website which helps in delivering a better user experience for the visitors.
Analytics
Analytical cookies are used to understand how visitors interact with the website. These cookies help provide information on metrics the number of visitors, bounce rate, traffic source, etc.
Advertisement
Advertisement cookies are used to provide visitors with relevant ads and marketing campaigns. These cookies track visitors across websites and collect information to provide customized ads.
Others
Other uncategorized cookies are those that are being analyzed and have not been classified into a category as yet.
SAVE & ACCEPT
Go to Top